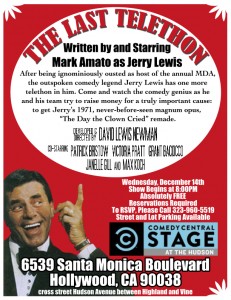 I’m making a return to ‘actual theatre’ for the first time in a long time in a new show called THE LAST TELETHON.  It’s a crazy show about Jerry Lewis raising money to get his film “The Day The Clown Cried” remade.   It’s a must see.  The cast is incredible and I’m in it too.  Here’s the info:

After being ignominiously ousted as host of the annual MDA, the outspoken comedy legend Jerry Lewis has one more telethon in him. Come and watch the comedy genius as he and his team try to raise money for a truly important cause: to get Jerry’s 1971, never-before-seen magnum opus, “The Day The Clown Cried” remade.